One of the reasons it took me so long to start my Elizabethan court gown was that I first had to make a proper corset or set of stays. (Stays is the term that is historically used to describe the corsets that were worn during the Elizabethan period, but I am going to use the term corset here because that is the title of the pattern that I used to make mine.) I was originally going to use the Simplicity 2621 pattern, but had some concerns about sizing (and honestly at this point, I don’t remember what they were!). When I happened to mention it to a friend of mine in our local costuming group she directed me to a custom Elizabethan corset pattern generator that is free online from elizabethancostume.net.

The pattern generator is so easy to use! You just plug in your measurements (there is a diagram that shows how to take the measurements):

It walks you step by step through drafting up the pattern using your measurements:

And then shows you how to sew a corset based on the pattern you just created:

The directions have options for making a corset without tabs, a simple tabbed corset, or a corset that has tabs that are boned. I decided to make the simple tabbed corset, as I just liked the look of that one the best. I have a few in-progress pictures. This was after I had sewed the shell and lining together:

I wish I had added a third layer on the inside for extra strength, but for some reason I didn’t think of it at the time.

Here is a photo of the boning channels: 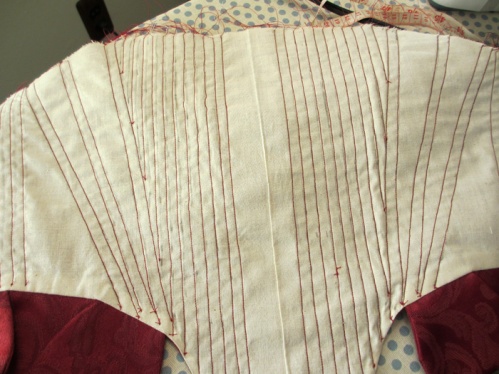 And photos of the finished product: 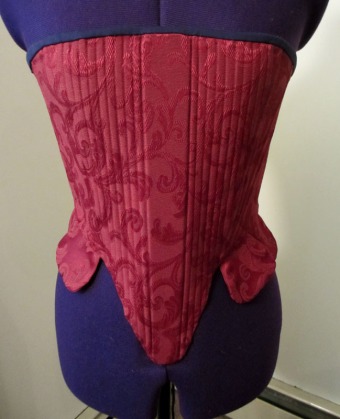 Somehow the point in the front center came out a little crooked. I think it was caused by uneven seam allowance while using my sewing machine to go around the curving point. If I wanted it perfect, I would do that part by hand next time, but with it being an undergarment that most people won’t see, I wasn’t too worried about it. I also need to invest in a better tool for setting eyelets. I’m looking into how to use an awl to prepare holes before sewing them, but I’m also considering just getting a pair of eyelet pliers to just pop the eyelets in. I’ve been using an eyelet hammer, and my ability to set the eyelets in properly just seemed to get worse and worse the more I used it. I now have several items that have lost eyelets because they were set in wrong. When I decide which method I’m going to switch to, I’ll try to remember to post pictures of the process the next time I have to set eyelets.

I don't really wear orange, but may I offer you an orange leaf in this trying time?
When you're relieved to have finished a big project, and your front brain tells you it's time to chill, but your shadow brain is whispering about new projects already.
Some fabrics need a bit of help to maintain pretty pleats. This weird wool/cotton flannel-backed twill was the closest I could find to the print that I needed, but it's not crisp enough to maintain pleats on its own. I'm helping it along by tacking twill tape to the back, similar to a photo of an extant garment that I saw someone post on social media once.
I would love to find the time and excuse someday to make a Victorian Fancy Dress costume. I have a bunch of images saved on Pinterest, but I also can't help but think that a modern theme mashed with the Victorian Fancy Dress style would be fun...
Loading Comments...
%d bloggers like this: