I’ve been thinking about buying eyelet pliers for a while, and back around Christmas I had a 50% coupon for JoAnn Fabric (which is the only large-scale fabric store within a 3 hour drive of where I live) so I decided to buy the Dritz Eyelet Plier Kit.

When I was ready to put the eyelets in the Faire outfit that I was making for my friend, I carefully read the instructions on the back of the plier kit which… were not very descriptive:

I did a quick Google search, hoping someone had created more descriptive instructions with photos or better illustrations, but I couldn’t find much. What confused me at first was the instruction to “Position fabric in pliers with mark centered over punch. Squeeze pliers to punch hole in fabric.” The accompanying drawing doesn’t really specify which part of the pliers is the “punch.” I couldn’t figure out if they meant the little knob protruding out of the top arm of the pliers in the picture up there. The knob has a rounded bulb on the end, and really doesn’t look as if it can punch a hole in anything except maybe paper. But I grabbed some scrap fabric and, certain that I was going to end up getting the pliers stuck together with the fabric in between, I started testing this “punching” ability.

Apparently the sharp part that actually creates the hole is on the anvil side of the pliers (on the bottom arm in my photo). The knob part (the punch) pushes the fabric through the sharp part of the anvil and creates a hole that is just big enough to work the eyelet through. Now that I understood, I grabbed my bodice pieces and marked out where the eyelets needed to go with a water-soluble marking pencil.

Then I lined up the punch/knob thing on the pliers with my eyelet marks. 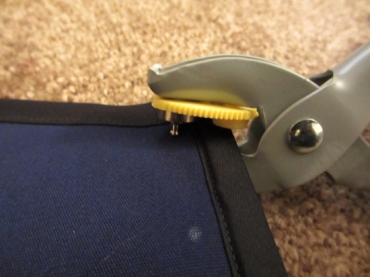 Gave the pliers a quick squeeze, and ended up with nice, clean punched holes. 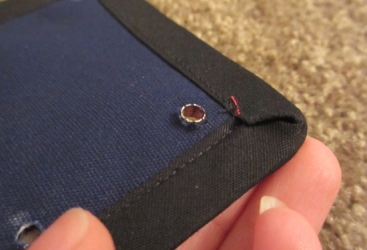 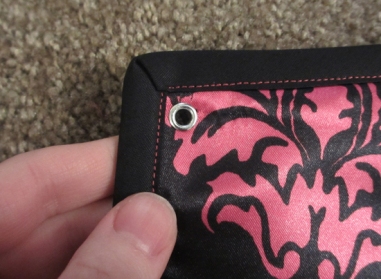 I gave the pliers a firm squeeze to force the barrel end of the eyelet to split and curl down onto the fabric, flattening the eyelet and (hopefully) sealing the raw edges of the fabric in to keep the hole strong. One thing I noticed is that the anvil side of the pliers wobbles a little bit, because it has to move to adjust to the angle of the opposite arm of the tool. I realized after a couple of my eyelets came out a bit messy that I had to make sure the ends of the barrel side of the eyelet were sitting neatly in the ditch of the anvil before squeezing so that the pressure was even all the way around the barrel of the eyelet while I pressed down. It took a little bit of practice. I wish I had practiced a bit more on my scrap fabric before putting the eyelets in the bodice, but I didn’t want to waste the eyelets.

Here’s what a neatly done eyelet looks like from the back:

And here’s the finished good-side of the front bodice panel with all of the eyelets in: 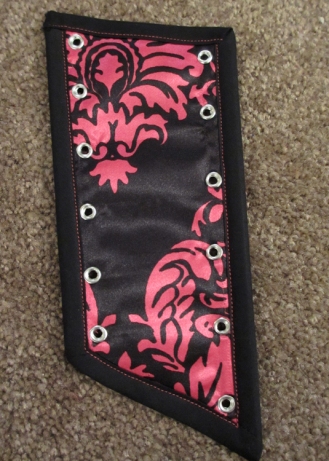 I hope this was helpful! If anyone has more questions, or if you’ve also used these pliers and have more advice, tips, or tricks, please share in the comments!

One thought on “Using the Dritz Eyelet Plier Kit”

I don't really wear orange, but may I offer you an orange leaf in this trying time?
When you're relieved to have finished a big project, and your front brain tells you it's time to chill, but your shadow brain is whispering about new projects already.
Some fabrics need a bit of help to maintain pretty pleats. This weird wool/cotton flannel-backed twill was the closest I could find to the print that I needed, but it's not crisp enough to maintain pleats on its own. I'm helping it along by tacking twill tape to the back, similar to a photo of an extant garment that I saw someone post on social media once.
I would love to find the time and excuse someday to make a Victorian Fancy Dress costume. I have a bunch of images saved on Pinterest, but I also can't help but think that a modern theme mashed with the Victorian Fancy Dress style would be fun...
Loading Comments...
%d bloggers like this: