I’ve been a little all over the place with my projects since the last post. I realized my inspiration for my court gown was waning, just because it’s been in progress for so long without being done, and so many other projects have taken precedence over it because of event deadlines. I got a little stuck, and took a week or two to breathe, and then decided I wanted to help my dad make his Ren Faire costume.

He was going to try to make a costume himself (he’s never sewn before) because he didn’t want to bother me, or take me away from my own sewing. But after he cut out the pattern pieces (calling whoever figures out how to fold them a “disturbed human being”) and started looking over the directions, he conceded and asked for my help. We’re going with a pirate outfit, because pumpkin pants and jerkins don’t really suit him. So far I’ve gotten most of it done, it just needs buttons and closures and finishes.

He’s already picked up a belt and boots to wear with it, and I picked him up a leather pouch at a con a few weeks ago.

I’ve also been slowly working on finishing the 12th century bliaut I started as a demonstration piece at a historical costuming program I gave. All that’s left on it is handsewing–but that includes sewing the trim on the neckline, setting in the lining, and putting in eyelets.

Two weeks ago I went to a reenactment where I was delighted to find a Wm. Booth Draper vendor. I drooled over the bolts of wool, shoe buckles, buttons, and natural-fiber threads, and picked myself up a couple new toys: the JP Ryan revolutionary-era frock coat pattern, and the Mill Farm breeches. 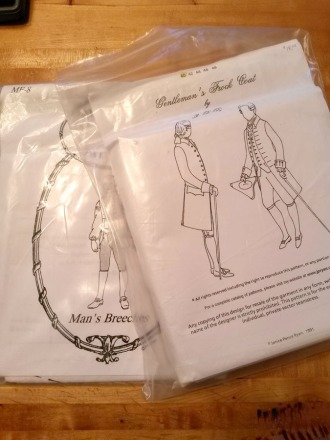 I’m a pretty tiny person, so the patterns are slightly too big, despite being the smallest size that is made, meaning I’m going to have to do some adjusting. But, I was able to get a few ideas on altering them smaller from a couple women in the “sewing room” at the fort encampment the day of the reenactment, so I’m excited for when I’ll get to try these.

Speaking of reenactment! (watermark from my Tumblr)

Last week I finally did something I’ve been meaning to do for a couple years now. I broke down and bought a pair of American Duchess shoes.

I bought the Stratfords, the Renaissance period shoes, to wear with my court gown because up until now I’ve been wearing simple flats from Payless with my Renaissance Faire outfits. The heel on these is much more comfortable than I was expecting (I don’t do well in heels at all. Can’t even walk in anything over 2.5″). They’re a wee bit snug, but I think the next size up would be too loose, so I’m hoping they’ll break in a bit. Eventually I want to get the Kensingtons, too.

Lastly, I finally figured out what to do with the sleeves for my Renaissance court gown last night. I realized I had a sleeve pattern already drafted up from the Tudor Tailor, and then I realized I had a lot more trim in my stash than I remembered, so suddenly my sleeves are coming together, and it looks like I’ll have them ready for the Faire this coming Sunday. 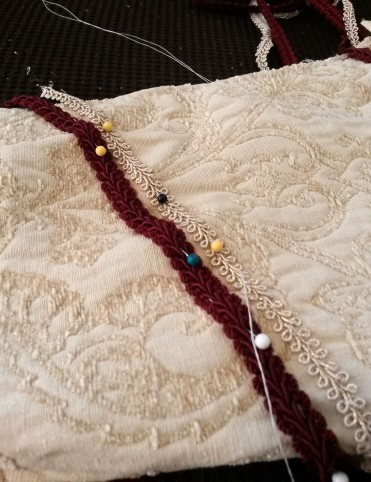 On top of all that that’s already going on, though, I have a hankering to make a new faire garb outfit for when it’s rainy or extremely hot, and I’ve also decided I really want to make a Merida costume, and I have a yard and a half of navy wool left from my bliaut that I can’t decide whether to use to make a pierrot jacket or a Renaissance waistcoat.

I’m trying to concentrate on just on project at a time, but for some reason I have this horrible urge to do all these things now, and I end up just stressing myself out with the pressure to make stuff.

At least I was able to work out the court gown sleeves and get those going. Hopefully the gown will be done for this weekend!

I don't really wear orange, but may I offer you an orange leaf in this trying time?
When you're relieved to have finished a big project, and your front brain tells you it's time to chill, but your shadow brain is whispering about new projects already.
Some fabrics need a bit of help to maintain pretty pleats. This weird wool/cotton flannel-backed twill was the closest I could find to the print that I needed, but it's not crisp enough to maintain pleats on its own. I'm helping it along by tacking twill tape to the back, similar to a photo of an extant garment that I saw someone post on social media once.
I would love to find the time and excuse someday to make a Victorian Fancy Dress costume. I have a bunch of images saved on Pinterest, but I also can't help but think that a modern theme mashed with the Victorian Fancy Dress style would be fun...
Loading Comments...