Way back in May or June I started this dress for a historical costuming demonstration at my library. I got caught up with other projects after the demonstration, but I’ve been slowly working on it bit by bit ever since. I was trying to get it 100% done by the end of December, but I finished the last couple of eyelets at the beginning of January, and I finally finished the sash today.

I didn’t use a pattern for this dress, but instead used this tutorial by Izabela of Prior Attire. The shell of the gown is made of navy blue wool. The lining and the kirtle are made of linen. I wanted silk for the sash, but the fabric options in my area are a bit limited, so I settled for a gray poly with a silk-like texture for now.

For some reason the gown is very hard to photograph, especially on the dress form. It doesn’t help that the navy is so dark that it always seem to show up black. 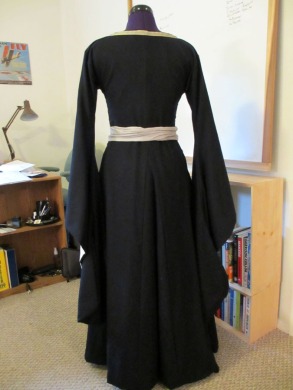 The trim around the neckline are just ribbons that I picked up at a trim store. 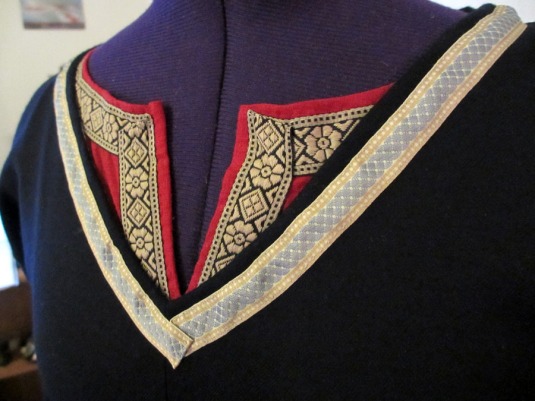 The dress opens on the sides to allow it to slip over the wearer’s head. I put hand-bound eyelets in using an awl and used leather cord to lace up the openings.

The long trailing sleeves are drapey and dramatic.

I’m waiting for snow to try to take some worn photos of this. The giant storm that’s hitting the East Coast decided to give us a miss.

Next project is more wool and linen: an 18th century menswear set. I’ve got the waistcoat half done and the frock coat cut out, so hopefully it won’t be another two months before I have an update to post. 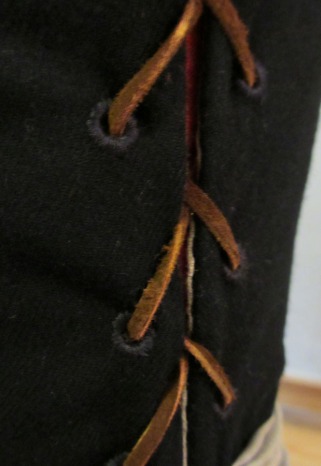 One thought on “12th Century Bliaut”